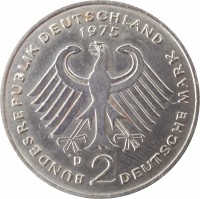 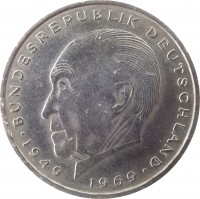 
Description:
Head of Konrad Adenauer facing left, dates of federal republic below.
Konrad Hermann Joseph Adenauer was a German statesman who served as the first post-war Chancellor of West Germany from 1949 to 1963. He led his country from the ruins of World War II to a productive and prosperous nation that forged close relations with France, Great Britain and the United States.