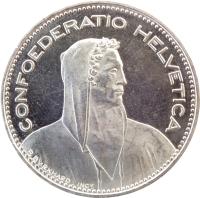 
Description:
William Tell facing right.
William Tell is a Switz folk hero. His legend is recorded in a late 15th-century chronicle. It is set in the time of the original foundation of the Old Swiss Confederacy in the early 14th century. According to the legend, Tell, an expert marksman with the crossbow, assassinated Gessler, a tyrannical reeve of Habsburg Austria. Tell is a central figure in Swiss patriotism as it was constructed during the Restoration of the Confederacy after the Napoleonic era.
Translation: Swiss Confederation.

Description:
Coat of arms of Switzerland flanked by sprigs. Denomination above, date below.