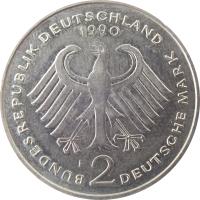 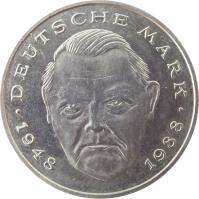 
Description:
Coat of Arms, name of country, date and denomination.


Description:
Head of Ludwig Erhard facing divides dates.
Ludwig Wilhelm Erhard was a German politician affiliated with the CDU and the 2nd Chancellor of the Federal Republic of Germany from 1963 until 1966. He is often famed for leading German postwar economic reforms and economic recovery in his role as Minister of Economics under Chancellor Konrad Adenauer from 1949 to 1963. During that period he promoted the concept of the social market economy, on which Germany's economic policy in the 21st century continues to be based.