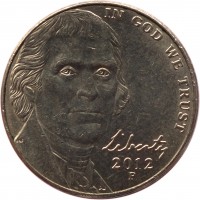 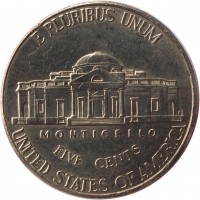 
Description:
Portrait of Thomas Jefferson completed during 1800.
Depicting Jefferson as Vice President at 57 years of age, just before becoming President, this Peale portrait had a significant iconographic role during Jefferson's lifetime; it was frequently used as a reference to create most of the images by which Jefferson's contemporaries came to know him.
The cursive "Liberty" inscription, which debuted on the 2005 nickels, is again presented in Jefferson's own handwriting.

Description:
Monticello, President Thomas Jefferson's Virginia home.
Jefferson designed Monticello himself, and construction began in 1768 when he was 25 years old. It was completed in 1823 when the former President and founding father was in his eightieth year. A skilled horticulturalist, Jefferson also planned the smallest details of the landscaping at Monticello.