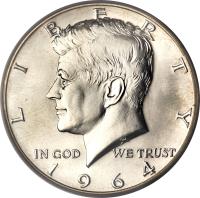 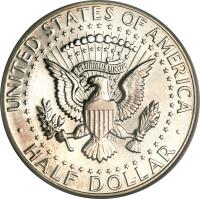 Engraved by Gilroy Roberts
Lettering:
LIBERTY
IN GOD WE TRUST
1964


Description:
President John Fitzgerald "Jack" Kennedy facing left, date below.
John F. Kennedy commonly referred to by his initials JFK, was an American politician who served as the 35th President of the United States from January 1961 until his assassination in November 1963. The Cuban Missile Crisis, the Bay of Pigs Invasion, the Nuclear Test Ban Treaty, the establishment of the Peace Corps, developments in the Space Race, the building of the Berlin Wall, the Trade Expansion Act to lower tariffs, and the Civil Rights Movement all took place during his presidency. A member of the Democratic Party, his New Frontier domestic program was largely enacted as a memorial to him after his death.

Description:
Name of country, denomination below.