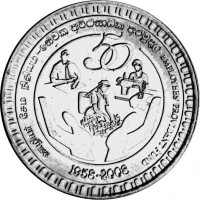 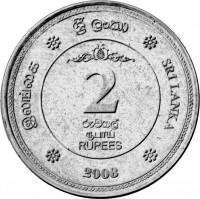 
Description:
The security and protection offered by the EPF for all its members, symbolized by two upholding palms, below images of an office employee, a tea plucker and a garment factory employee. They depict three industrial sectors in the economy viz Agriculture, Industry and Services. Numeral 50 just above to right, symbolizing the Golden Jubilee of the EPF. Around between two circles, the legend EMPLOYEES PROVIDENT FUND in Sinhala above and in Tamil and English to left and right. with 1958-2008 below. A petal design appear around the periphery.


Description:
At the center, the legal tender value of the coin 2 in large numerals, with the currency RUPEES in Sinhala, Tamil and English languages below. An elongated floral design above. The year of issue 2008 at the bottom center, the name SRI LANKA in Sinhala appears on Top and in Tamil and English appear on the left and right along periphery outside a plain circle. Four 8-petal symbols separate the words. A design appear around the periphery.