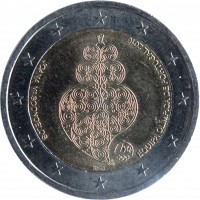 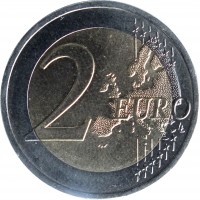 
Description:
Visual composition based on the well-known work of art signed by the author, Mrs Joanna Vasconcelos, the "Heart of Viana", inspired by traditional jewelry from the North of Portugal (around the city of Viana do Castelo). It symbolises the support of the Portuguese people to the national team by the occasion of the Games. At the left and the right, in semi-circle, are the inscriptions "JOANA VASCONCELOS" and "EQUIPA OLÍMPICA DE PORTUGAL 2016", respectively. At the bottom is the mintmark "INCM" The coin’s outer ring bears the 12 stars of the European Union.