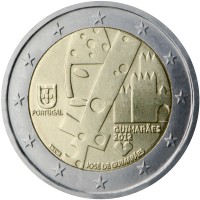 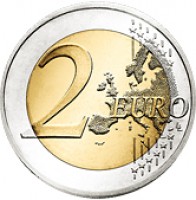 
Description:
European Capital of Culture 2012, the city of Guimarães in northern Portugal.
Stylised image of Afonso Henriques, the first King of Portugal, together with his sword and the Castle of Guimarães, which is regarded as the birthplace of Portugal as an independent nation in the 12th century. To the left of the image is the Portuguese shield above the word “PORTUGAL”. To the lower right is the inscription “GUIMARÃES 2012” with the logo of Guimarães 2012 European Capital of Culture. Along the lower edge of the inner part are the mintmark “INCM” and the name of the designer, “JOSÉ DE GUIMARÃES”. The outer ring bears the 12 stars of the European Union.