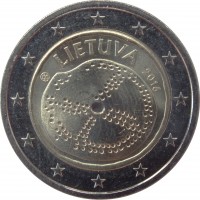 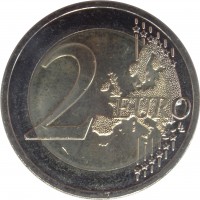 Description:
Amber disc decorated with a corsspiece of small holes, it is one of the most characteristic symbols of the Baltic culture. The inscription LIETUVA and the year of issue 2016 are place at the top of the coin. The Lithuanian min mark is also impressed. The coin's outer ring bears the 12 stars of the European Union flag.