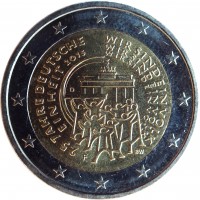 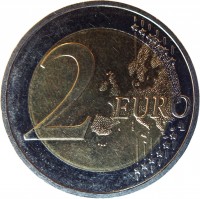 
Description:
The people in the foreground, who embody a new beginning and the advance towards a better future, are standing in front of the Brandenburg Gate, symbol of German unity. The rendering of the statement Wir sind ein Volk (‘we are one people’) — a collective expression of will by German citizens – represents the path forwards towards German reunification. The inner part also features the mint mark of the respective mint (‘A’, ‘D’, ‘F’, ‘G’ or ‘J’) as well as the issuing country’s country code ‘D’ and the engraver’s mark (the initials ‘BW’ — Bernd Wendhut). The coin’s outer ring depicts the 12 stars of the European flag.