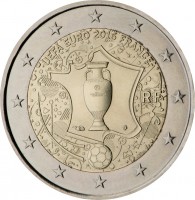 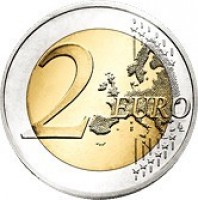 
Description:
Held every four years since 1960, the UEFA men’s football European Championship, commonly referred to as "the Euro", will take place in France from 10 June to 10 July 2016. Euro 2016, the fifteenth edition of the European Football Championship, is organised by the Union of European Football Associations and brings together the best men’s football teams in Europe. The winner of the competition receives a small-scale version of the Henri Delaunay Cup, named after the man who invented the competition. The design of the coin features the Henri Delaunay Cup in the middle of an outline map of France, along with the two marks of the Paris Mint. The letters RF for République Française (French Republic) are to the right of the map of France, and the name of the competition "UEFA EURO 2016 France" is written above it. Below the map, a football stands out in the foreground. All of this is set on a background that features graphical elements representing the competition. The coin’s outer ring bears the 12 stars of the European Union.