2 Euro - 100th Anniversary of the Restoration of Lithuania's Independence (2018) 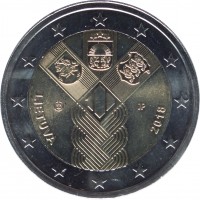 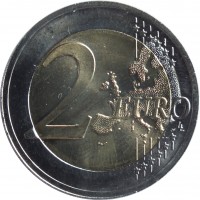 
Description:
Baltic States are symbolically represented as a braid. They are united by their history: a common past, present and future. A stylised numeral representing the 100th anniversary and the heraldic signs of all three states are featured as well. The inscription of the country’s name and the year of issue are depicted in a semi-circle. The mark of the Lithuanian Mint and the mark of the designer are also included. The 12 stars are incorporated in the outer part of the design, set out as they are on the flag of the European Union.