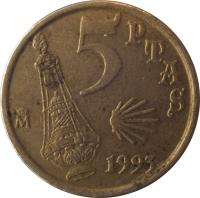 
Description:
Image of James, son of Zebedee (in Greek Ιάκωβος, in Latin Iacobus, in Spanish Santiago), or James the Oldest – apostle of Jesus.
According to the legend, as the apostle had died on the Holy land, his remains were put to the boat and let on the waves of Mediterranean. By miracle, the boat float to Spain, where this saint had preached earlier, and it was washed to the shore of the river Ulla – there the town Santiago de Compostela reveals later. In 813, as the church legend states, the monk-hermit Pelayo, who lived in this place, followed the lodestar and found this reliquary, which remained incorrupt. In 896-899 king Alfonso III el Magno (838-910 or 912) issued a decree and after that little church was built on that place where the reliquary were found. The place was named Santiago de Compostela (in Latin Campus Stellae "place marked by star"). This apostle, according to the legend, made a long trip from the Holy land to Spain, so he was named the patron saint of the pilgrims. By the XI century the pilgrimage in Santiago de Compostela was the second most important pilgrimage (only pilgrimage to the Holy land was more important).
The recollection in the catholic church – June 25th, in the orthodox church – April 30th and June 30th (according to the Julian calendar). If this day falls on Sunday, catholic church celebrates the year of Jacob, or the Jubilee year. It’s the time, as all Christians who visited the remains of apostle with good intentions received as the present the main thing – the absolution ("The Year of absolution"). The tradition of the jubilee of absolution was borrowed from the Old Testament. It was first offered by the Catholic Church in 1095 for the pilgrims, who traveled to the Holy land, in case of their sudden death.
The release of that coin was dedicated to the yet another jubilee year (1993) of the Saint James, son of Zebedee.
On the left of the image of Saint James, in the form of wanderer with his crook, was the shell of the scallop or the scallop of the Saint James (in French Fête de la coquille Saint-Jacques).
In the culture of the Christianity this mollusk symbolize Sunday. The altars, capitals and tombstones were decorated by it. The shell was portrayed on the fountains of the temples, as the architectural ornament. As the tradition of pilgrimage to the remains of apostle Jacob was remained, the scallop becomes very important religious symbol of Santiago de Compostela, pilgrims and apostle of his own.
Along the upper side of the coin there is the name of the apostle written in Spanish framed by two relief areas: JACOBEO (Jacob).
The image of the shelf is crowned with the year of release (’93).
On the basis of the obverse – the name of the country-issuer written in Spanish – ESPAÑA (Spain).
The contour of the coin on the obverse is limited by the relief strip (piping).


Description:
Botafumeyro (Galician Botafumeiro; emitting the smoke), the biggest censer in the world, that is used in the Cathedral of Santiago de Compostela for 700 years.
On the left from Botafumeyro the mark of Royal Mint of Madrid is put: letter "M", crowned. On the right – there is large denominational numeral (5), shorten name of the national currency – PTAS (peseta) and the stylized image of the shell of the scallop.
Today the shell of the scallop is the official symbol of the Saint Jacobs route. Along this route there are pointers with the stylized images of the mollusk, yellow on the blue background (it recalls the rays of the sun or the diverged roads).
The contour of the coin on the obverse is limited by the relief strip (piping).